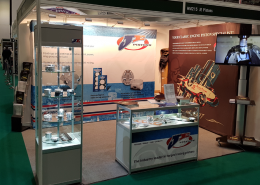 JE PISTONS was also 4 days represented at the HMI in London with a JE PISTON booth.

This Show was focusing on Classic Race and Street Cars and there were plenty of those to see.

A true party and lust for the eye for all the Classic Cars fanatics Worldwide.

With a lot of visitors from all over Europe and UK and daily spectacular shows and Auctions the vibe at this event was very good and professional.

Lots of car fanatics, engineers and drivers came to our booth to share there experiences of JE Pistons in their car.

Or to get more information about what JE Pistons can do to upgrade their engine.

Porsche, Ferrari, Lamborghini, Bentley, TVR, Alfa Romeo, BMW, Ford, Opel drivers they all came by and were proud of the JE Pistons in their car.

Also Nigel Mansell was there as former F1 Driver and Champion he gave some interviews on every day of the show.

Also his former F1 Racing car was participating on the indoors Race Circuit track … And what Pistons were in his car? … JE Pistons what else!

We helped a lot of new prospects with useful information and guide them to our UK dealer and Distributor network.

So soon we will have many more happy JE Piston users and Classic and Race drivers!

A short video of  the F1 Racing car with JE Pistons! 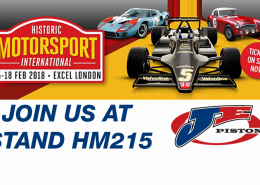 This will be the first time JE Pistons will exhibit at the Historic Motorsport International in London, United Kingdom with their own booth!

JE Pistons is very active in the classic engines market and manufactures many pistons for classic car engines.

JE Pistons is specialized in custom made pistons. We can make pistons to your specifications to optimze your engine. Our engineering team will take your heartburn out and organize all of your piston projects. JE manufactures your custom set of pistons in 4 weeks, the fastest delivery time in the industry. We can even expedite your custom set in as little as 5 days!

Next to our custom capabilities, we offer a full program of shelf stock pistons kits for both Sports Compact and V8 (US) applications.

Our JE Piston product specialists are able to answer all your questions if we are talking about pistons or engines.

Come and see our all new booth and all other new products we have to offer!