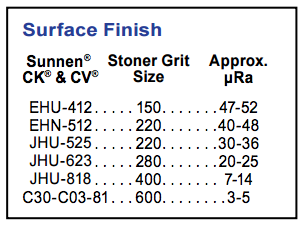 Why a Plateau Finish?

Plateau honing is the popular name for the process that replicates the cylinder bore surface finish normally produced by the rings after they have worn down the surface peaks during “break in”. This technique produces flat areas or plateaus (Rk) on the cylinder wall after finish honing by using a very fine grit stone or a PHT type brush tool to remove the peaks (Rpk) from the surface. This lowers the overall roughness average (Ra) while maintaining valley depth (Rvk) in the cross-hatch pattern of the cylinder wall. A high Rvk value is very desirable for oil retention qualities and will substantially reduce “break in” time and increase ring life.

Ra (Roughness Average) = Used to describe surface roughness as an average between the peaks and valleys that exist in a finish over a specified area, usually micro inches.

Cross Hatch = The pattern of intersecting parallel lines left after finish honing operations are completed. The smaller the intersecting angle, the larger the area (Rk) between the hone marks.